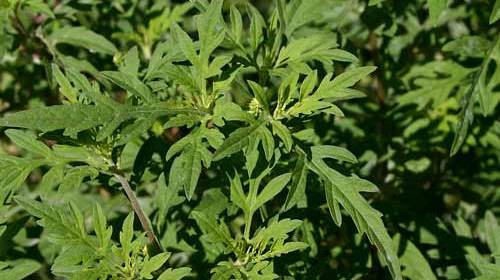 In this series, we’ve already learnt about the impacts of alien trees and garden plants in Norway, but others are invading too, including some that are easier to overlook. And some of them can not only out-compete native species, but also pose health problems for humans. In today’s guest post by Vanessa Bieker, we look at Ambrosia artemisiifolia (common ragweed), which produces highly allergenic pollen and is one of the main causes of hay fever.

Common ragweed is an annual wind pollinating weed that comes from North America, and was introduced to Europe in the late 19th century. Today it is found on every continent except Antarctica. It is established in South Europe (etc. France, Italy, Hungary) where the climate is more similar to that in its native range, but it is spreading further north. By 1996 it had reached Sweden and it has now spread to Norway, although it seems that it is not able to reproduce here yet. This is likely to change in the near future due to a warming climate and its ability to adapt. The plant dies with the onset of frost, but seeds can remain viable in soil for at least 40 years. Common ragweed normally germinates in April and grows rapidly. It can therefore out-compete other plants. Fully grown plants can be between 30 cm and 2 m high. A single plant contains both male and female flowers and is able to self-fertilize. Thus even a single plant can give rise to a whole new population. The plants tolerate damage quite well, they have the capacity to regrow and produce flowers even after mowing.

How did it get here?

A. artemisiifolia is usually found in disturbed habitats such as abandoned fields, along roadsides, at construction sites or in private gardens. The ragweed can be spread in many ways, from harvesting or mowing machines, to the spread of compost that contains ragweed plants.  The seeds seem to be rather heat tolerant and can survive composting. As the seeds can float, dispersal through water streams is also possible. The main vector into new ranges is probably from contaminated seeds imported from North America, especially sunflower and bird seeds. About 70 % of birdseed mixtures are contaminated with ragweed seeds, which are often able to germinate.

What does it do?

Bad news for people already suffering from hay fever: due to the late flowering of ragweed (August – September), the pollen season expands. Because the size of the pollen is extremely small, it can be carried by wind several hundreds of kilometers. And a single plant can produce quite a lot of pollen (up to 2.5 billion grains per plant per day). So it’s best to get rid of the plant before it starts to flower. This will also help preventing it from spreading further. If you want to get rid of ragweed in your garden, it’s best to wear gloves as it can also sometimes cause dermatitis even if you’re not suffering from hay fever.

But there is not only the problem for people with hay fever. Ragweed is also a huge pest in agriculture as it causes immense yield losses (up to 30 % in soybeans). 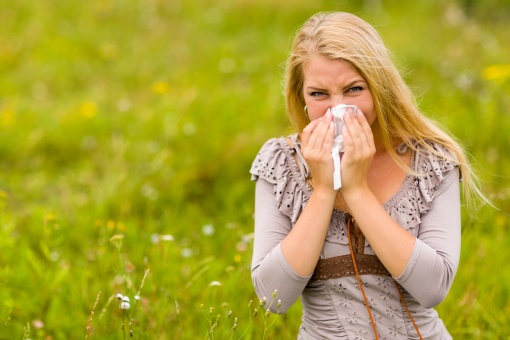 This is legitimately the only decent free-to-use photo I could find when I googled hayfever. I wish I looked this good when I sneezed, and not like you’re alcoholic uncle with mussels for eyes. (Image Credit: Needpix.com)

What to do about it?

Common ragweed is still pretty rare in Norway, but actions against it should already take place before it manages to become established here. Once an alien species is established and widespread, eradication can be very difficult (or impossible) and rather expensive. Ragweed for example can build up a seed bank relatively fast. Most of the seeds produced in one year will germinate in the following year, but some seeds remain in viable in the soil. So if no seeds are produced in one year (because the season was too short or the plants were removed before flowering), those remaining seeds from previous years can germinate in upcoming years and thus keep the population alive.

A good way to get rid of ragweed is by uprooting the plants. As they have a high ability to regrow, those plants should be stored without contact to soil. It’s best to do it before plants start to flower to prevent pollen production and reproduction, as contact with ragweed can lead to skin irritation, gloves should be used.

If you suspect that you have found common ragweed, you can use the following webpage to help you confirm it:

If you would like to know more about common ragweed, we invite you to read the following articles: