In this series, we’ve looked mostly at species that have been introduced at defined points in time. The Pink Salmon and the Red King Crab were introduced into Russian waters near Norway in the 50s, the Canada Goose was brought to Europe in the 30s, the Sitka Spruce in the late 1800s. But with the onset of climate change, warmer conditions in the Arctic and sub-Arctic mean that the doors will open for more gradual arrivals. So let’s look at how climate change will facilitate the arrival of these newcomers.

The Loss of Temperature Restrictions

As we’ve established before, an invasive species is a non-native species that has a negative effect on its newfound habitat. For it to get to this stage, three things need to happen. It has to first be able to physically reach said habitat, then colonize it, and lastly establish itself and grow. A warming climate can assist in all three of these processes. Many species have historically been prevented from reaching certain habitats by biotic factors such as temperature. As the climate changes, species can therefore move further north (or south, depending on the hemisphere), or up to higher elevations. The Argentine ant (Linepithema humile), one of the world’s worst invasive species, is predicted to expand its range significantly over the next 30 years, potentially encompassing most of Europe, as areas previously too cold become accessible.

Colonisation and establishment are also facilitated by the rise in temperatures. Many species who could only persist in a region due to constant immigration have now been able to establish self-sustaining populations further north or south. Many species previously brought in as ornamental species, be it in gardens, zoos or aquariums, that could not persist upon escape into the wild, may soon be able to, such as the White Cloud Mountain minnow (Tanichthys albonubes), an aquarium fish which may threaten the Great Lakes ecosystem in the near future. The constriction of suitable habitat for native species can also facilitate the entry of alien species, who can flourish in the release from competition.

The increase in suitable distribution ranges for invasive species will also make management of these species much more difficult. Currently, molt sites for the Greater Canada Goose are a target for managers, as they can have the most impact on populations with lower resources. However as suitable habitats increase in number, these targeted population culls will be less effective. 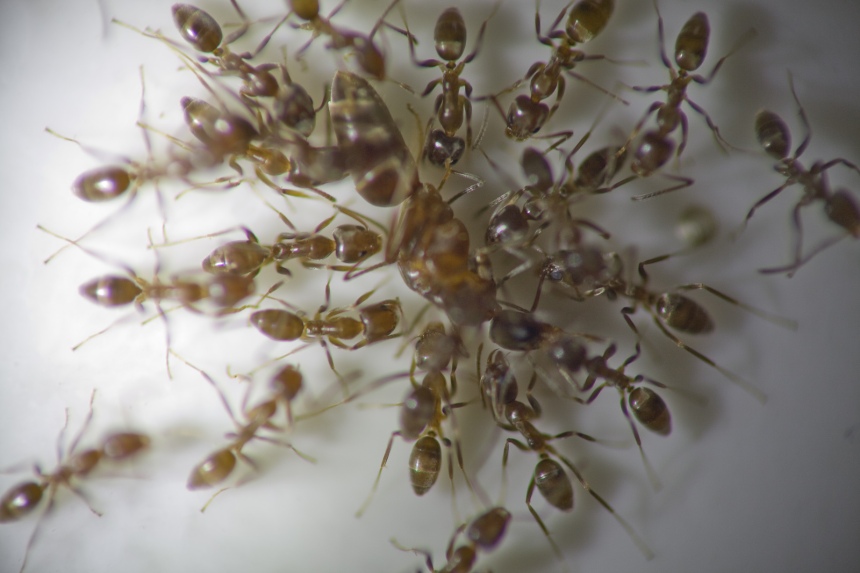 Due to increased temperatures, by 2050 the Argentine Ant could be present through most of Europe (Image Credit: Matthew Townsend, CC-BY 2.0)

The introduction of new species is not the only threat posed by climate change. Many alien species are not invasive, instead existing in sympatry with native species. However an increase in temperature, or an increase in disturbance caused by extreme weather events, could change this. Alien species that are able to establish themselves in novel ecosystems often have higher levels of adaptability, which could mean that in the face of increased disturbance they would gain a competitive advantage.

Likewise, increasing temperature may favour one species over another. A classic example of this is the northern pike (Esox lucius), which was recognised as a ‘regionally alien’ species by Norwegian Institute Artsdatabanken for the first time this year. Previously, the pike and the brown trout (Salmo trutta) were able to coexist in many freshwater lakes, however with increasing temperatures, pike have been able to outcompete the trout, with many local extinctions of the trout as a result.

So what’s our responsibility here?

There’s a knee-jerk reaction in much of ecology to brand non-native species as a problem, one that needs to be stomped out. Personally, I believe that in certain situations, this is a valid option. Where our actions have accidentally allowed species into new ecosystems in which they can wreak havoc, I believe we have a responsibility to at least mitigate the damage, and remove them if we can. However the problem posed by the gradual spread of new species due to climate change is more complex.

Our actions are indeed those which have altered introduction pathways and establishment conditions. I won’t waste time asserting that climate change is a man-made problem here. Yet for many of the species that are moving into new areas as temperatures alter, there is nothing anthropogenic about their dispersal. These ecosystems have changed, and their biota is changing to match it. By keeping out new species, are we preserving natural ecosystems, or creating habitat ‘museums’? We also have to consider that many of these species who are seeing their northern or southern distribution ranges expand may find their ranges constricted at the other end, albeit as a slower rate.

Whilst these are questions we will have to consider in the future, for the moment I do believe we need to ensure we preserve biodiversity, so in cases where invasive species are causing reductions in species richness or transforming ecosystems, we should be taking action. There has been a huge rise in recent years of the use of predictive models to determine future ranges of invasive species and their potential impact on climate change. My own project is one of these, and we’ll go into this in more detail in the coming week, when we look at the impact of river fragmentation on the effects on invasive fish.