Why Do We Only Care If It’s Fluffy?

Species like koalas are cute and fluffy, and thus easy to provide funding for. But how do we save species that are more threatened and less charismatic? (Image Credit: Jesiane, Pixabay licence, Image Cropped)

After my recent talk with Marlene Zuk (which we’ll be publishing later this week), I have been thinking more about the species we focus on in ecology and the species we neglect. Dr. Zuk is a specialist on insects, who has remarkably been able to sell the importance of topics as obscure as cricket sex and parasite wickedness to the public (as you can see in her brilliant TED Talk). However this is more the exception than the rule. In ecology, conservationists have traditionally focused on a select few animals. So why do we care about saving the pandas that do not want snuggles (or to get it on), and ignore the native worms that are being replaced by invasives? Can we change what the public cares about, and ask them to focus more on the role of a species in an ecologic system?

Why do conservation projects focus on certain species and not others?

If you open the web page to WWF (just look at it’s iconic symbol!) or any other big conservation organization you are likely to see photos of majestic whales leaping from the ocean or lions stalking the Savannah. While these species are unquestionably important, what about the little guys? I like to laud the sheer bad-assery of mind-controlling parasites to anyone who will listen politely before sneaking away for a drink. At least as a biologist I get away with being into weird animals. Duck penises have come up at more than one dinner party. So why is the public seemingly disinterested in these less instantly-appealing aspects of ecology?

In conservation, we focus on species we can relate to as humans, so species with 1) faces and 2) charisma. These ‘charismatic species’ are typically apex predators or large vertebrates. These are the animals on the t-shirt you bought or have a poster of in your room. They are the species we project our values on. We have feared these animals in the past or want to have one as a pet. Remember in the Hangover how Mike Tyson had a tiger and not a bucket of tape worms (which are arguably scarier)?

This projection of human values to the natural world also extends to the management of natural areas. In the Netherlands, the public bemoaned the fact that managers let a natural die out claim the lives of many horses and cows in the area. But that’s nature – sometimes populations boom but then, inevitably, there will be a decline. In contrast, the starvation of large numbers of koalas due to overpopulation could also be solved be minor culls, however this would lead to public revolt.

In Planet Earth, when a cute gazelle gets brutally torn to pieces by a lion (narrated by the dulcet tones of Mr. Attenborough), we identify with the gazelle’s struggle. But we cannot save every individual in a population simply because we identify with them. In these nature documentaries, an anthropocentric narrative is imposed on the actions of individuals so we relate and care about them. However, it is important to remember species do not exist for our benefit but rather as part of a larger system that we can only try to understand using our own experiences as a lens. 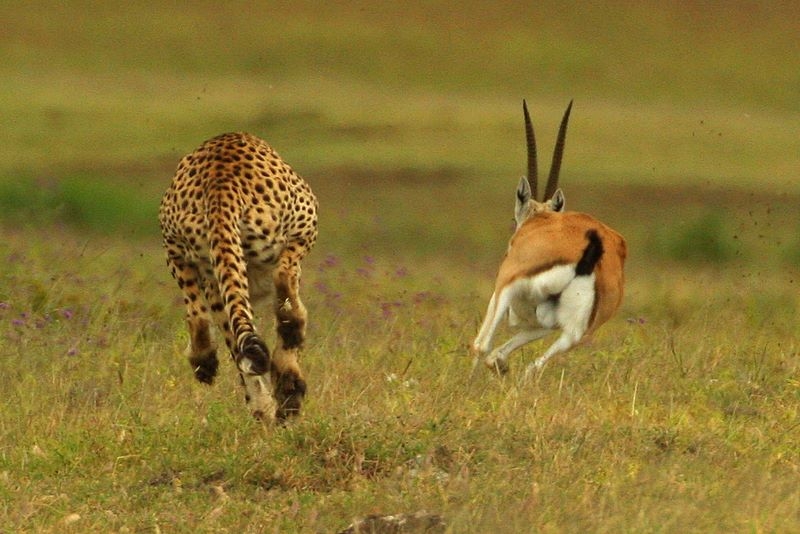 It’s easy to captivate people with an anthropocentric narrative, such as the flight of a gazelle from a larger predator. But can we do away with this, and interest people in science purely for the sake of science itself? (Image Credit: Demetrius John Kessey, CC BY 2.0)

So can we change public perception of which species are important?

Marlene Zuk mentioned that at an outreach event, when asked what the public’s favorite parasite was, random people could actually identify cool parasites they knew of. They liked to talk about the weirdness we find in nature. So maybe this is not the public’s problem rather than scientist’s perception of the public. Instead of focusing on the easy species, maybe we need to educate people about why they should care about and protect a less charismatic species. By engaging the public and getting them to perform their own experiments, Matt von Konrat, of the Chicago Field Museum, has even gotten people to care about liverworts! Liverworts! As he stated in the interview, people are naturally curious, it is just about harnessing that curiosity and engaging them. People also care about the species they see, so maybe a Pixar film about microorganisms could lead to a new push for the conservation of previously ignored species. I’m kind of not kidding. Though please God let’s not have an Osmosis Jones sequel (alright maybe A Bug’s Life 2).

Another approach is the systems approach (which takes advantage of the Umbrella Effect) whereby conservationists using the plight of a single species as justification to protect a whole ecological system. Part of the reason that selecting new species is important is while one species might be the focus of a conservation campaign, this species is used as a surrogate for protecting a whole ecological system. Pandas are a great example, as whilst their populations took decades to (painfully slowly) recover, other species in their ecosystem also recovered and flourished at the same time.

So there are benefits of the public’s obsession with the charismatic. Yet whilst this is useful in many situations, there are many more examples where need to take conservation action in areas where there are no cute and cuddlies providing other species with an umbrella.

So if you’re interested in the natural world, great! Keep espousing the values of the weird and wonderful to those around you, whether that involves a human-centred approach or it’s just borne out of genuine interest in the minutiae of an ecosystem. And scientists, whilst there’s a tendency among us to think the public will only care about it if it’s in a  Buzzfeed listicle, there are tonnes of examples out there of the public showing interest in the more ‘mundane’ side of ecology, when we engage them with enough enthusiasm.