The Culling of Kangaroos

Having recently spent some time out in country New South Wales, I thought I’d share a quick description of the sight that greets you when you get out past Deniliquin in southern New South Wales and start driving north. It’s arid land, but it’s might still be beautiful were it not for the dead kangaroos that litter roadsides. You might see fifty on the drive from Albury to Deniliquin, but that quickly turns into hundreds as you go even further inland towards the border with South Australia.

There are a couple of reasons for the overabundance of corpses along the roads in NSW. Some of them have obviously been hit by cars the night before, when they gather in hundreds along largely empty roads. But others lie on the opposite side of the fences which demarcate local property. They haven’t been dragged to the fences and then thrown over, they’ve simply starved to death.

Many parts of Australia have been overpopulated and overgrazed by kangaroos for quite some time now. They’re overabundant because they’ve been left unchecked; the absence of the dingo means they don’t have many natural predators. This leads to kangaroo numbers greater than that which local ecosystems can support, and then to starvation.

The usual solution in such situations with species like deer or cattle is to cull. Removing a proportion of the population allows the others to persist without starving. It also means less overgrazing, which can improve diversity of a range of other wildlife, including reptiles and insects. It leads to a healthier ecosystem. However, there’s often a pushback against the culls, mainly because it’s seen as inhumane.

Some people opposed to the culls provide alternatives: relocation to areas less populated. Yet relocation is often impractical and costly, and the number of roos we’d need to translocate to solve the problem in affected regions would be enormous. Many people who oppose the culls do so because the killing of a kangaroo clashes with internal values, ranging from nationalism to ethics to the fact that they’re so damn cute. But why is a brutal death by starvation then acceptable?

There is also more than a smack of double standards surrounding the issue. As wildlife ecologist Kath Handasyde said during our recent interview, “in most places around the world including Australia, if wild animals get to abundances where they compete directly with livestock, mostly there’s a permit given to cull, and that seems to be quite acceptable.” The fact that we are prepared to cull kangaroos to help our farmers and not for the creature’s own good rankles. Organisations like the RSPCA will prosecute farmers who do not kill starving cattle for inhumane treatment, and this begs the question – surely kangaroos are as deserving of our compassion as livestock? 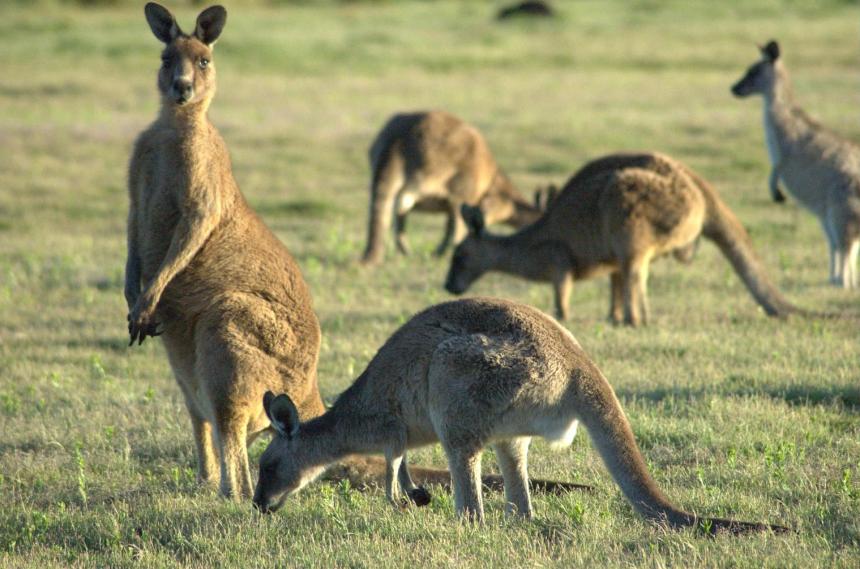 Species like the Eastern grey are dominant throughout large stretches of the country (Image credit: PanBK, CC BY-SA 3.0)

However there is a flipside to this, and a valid one. Many kangaroos are killed inhumanely every year outside of prescribed culls, often carrying babies in their pouches. Many of these kangaroos are simply left to die. And whilst the kangaroo meat trade in Australia is currently a very sustainable one, should demand for kangaroo meat increase beyond what the culls are capable of providing, we may risk restricting kangaroo ranges.

I believe that the reintroduction of dingoes to parts of Australia where they have been driven out of would help manage populations in a more humane manner, hopefully acceptable to more of the general public. However, in these situations, the typical problems with rewilding arise. We’ve talked about rewilding at length on the blog, so I won’t go into it in more detail now, instead I’d encourage you to read Lara Veylit’s excellent piece on it here. Suffice it to say that dingoes would naturally threaten livestock, which would lead to an outcry from farmers. And as Kath mentioned, “city communities somehow have to come to terms with the fact that we demand fresh food, so we have to look after farmers.”

Kangaroos are undoubtedly a cute species, emblematic to Australia. But their populations are now having a negative impact on their health, and we need to have a more thought out approach to the management of their populations.  Because as much as the thought of people killing kangaroos might be hard to stomach, I guarantee seeing one hundred kangaroo corpses stretched along a mere 5km of road is harder.