Community ecology, as a relatively new discipline, is fraught with challenges. Here, we look at why an hour spent talking about those challenges may make you feel like the PhD student pictured above (Image Credit: Lau Svensson, CC BY 2.0, Image Cropped)

Anyone who has forayed any small distance into academia will probably understand the following quote by Aristotle.

According to Stewart Lee, participating in further education means embarking on a “quest to enlarge the global storehouse of all human understanding”. This might be true, yet venturing into academia also means that the more answers you learn to challenging scientific questions, the more questions get opened up. It’s the circle of academic life.

Nowhere was this more apparent than last week’s Community Dynamics meeting at the Centre for Biodiversity Dynamics, here at NTNU. Community ecology is still a relatively new discipline by ecological standards, and integrates aspects from a swathe of other ecological disciplines. As such, these meetings are always rife with people from different ecological backgrounds arguing over what our research group should be solving. Whenever one point gets made, that point seems to open up the floor to an entirely new wave of arguments.

NB: If you’re a little vague on what community ecology is, I’ll go into it in point 5. Spoiler alert: We’re confused too.

So the question thrown up at this session was simple – what are the biggest challenges for Community Ecology going forward? I’ve included our list below (admittedly with bias given to the ones I struggle the most with).

Over the last decade, models which simultaneously account for the effects of environmental variables and species co-occurrences have risen in popularity (commonly known as Joint Species Distribution models – JSDMs). These models have enabled us to look at the way changes in a habitat can affect a whole group of species, instead of just one or two.

Yet these models only account for the species being in the same location at the same time. And since a location can mean anything from a 2×2 metre quadrant to a lake the size of Manhattan, that doesn’t guarantee that the species are interacting with each other, or even have any quantifiable effect on each other. Often, the associations between species suggested by these models line up with what we already know about the species, but that doesn’t mean we can assume knowledge about any other interaction in that system. For instance, we know that as temperatures rise, northern pike begin to speed up, and outcompete brown trout. Yet our JSDM would only suggest a negative association as temperature increased – how would we know for sure that it wouldn’t be the trout which would have the negative effect on the pike? That link between species association and the actual dynamics of an ecosystem needs to be solidified.

This might sound easy on the surface – you take your location, and just isolate the species you’re interested in, right? But in leaving out certain species, you could easily be missing key drivers of other species distributions. If you’re modelling bird species only, you’re probably not including key prey species, or predators for that matter. Parasites also play a huge role in a food web, and they are generally much harder to quantify or account for than their host organisms. If your site is a lake, do you include local birds which move between lakes constantly?

Species like this white tailed eagle might not be spatially tied to one location, yet it still plays a vital role in that community (Image Credit: Jacob Spinks, CC BY 2.0)

This is something of an extension to the above point. Looking at species distributions in spatial and temporal hierarchies has become more commonplace lately. But at what scale do you define a community? I work with lakes, which act pretty neatly as islands, but if you’re looking at interconnected patches of land or sea with no singular, well-defined pathways between them, scale becomes more complicated.

Integrating time into the studies can also be tricky. If we’re looking at the effect of rising temperatures over a number of years, it could be easy to interpret community shifts as a product of a changing climate. But (and don’t let any climate deniers read this), that could just be a product of a natural community fluctuation that we’re only seeing one part of.

Two major trends have heavily influenced ecological data today. One is improved integration and availability of data (see my interview with GBIF’s Tim Robertson for more on that), and the gradual acceptance of citizen science as a viable source of data. It means we have access to large-scale data for a huge range of species.

Yet as the data quantity has risen, quality hasn’t increased at an equal rate. Citizen science is a huge boost when handled correctly, but it varies in quality wildly. And bringing together disparate data sources which were collected for different purposes isn’t always easy. Community ecologists are producing increasingly complex models, which our data needs to match.

5. What is Community Ecology Anyway?

At some point during the meeting, our International Chair pulled the infamous “let’s take a step back” move and asked us all what the point of community ecology was. If you thought that would help clear things up, then I clearly haven’t elucidated the general frustration in much of the discipline well enough. Community ecology is a very vaguely defined term, and much of it can be construed as part of other disciplines like evolutionary ecology or population dynamics (yet it simultaneously has been accused of not integrating these disciplines well enough into its own practices).

This isn’t particularly odd. As a general rule, the more recent a discipline is (in any field), the more trouble it has defining itself (see Ecofeminism). And there’s nothing strange about different people within a discipline having different goals. But just as our group has resolved to find some common goals going into our next phase, it’s probably time for more communication between community ecologists the world over. There have been a few international Community Ecology conferences that have started recently, and I hope that initiatives like these produce some more cohesive goals within our… network. 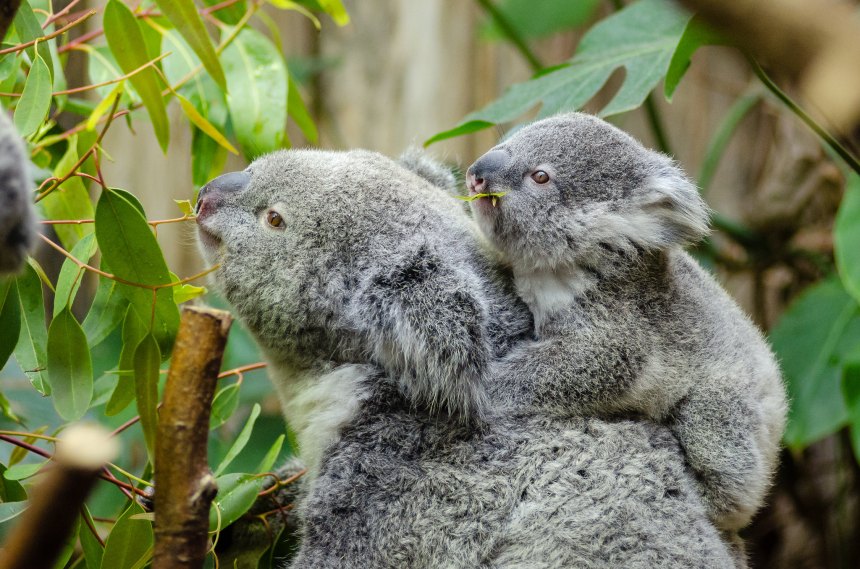 Recent claims that the koala is now functionally extinct were not true. Yet they are now extinct from certain areas, and we are yet to see how the lack of the koala in those habitats will affect the wider community (Image Credit: Mathias Appel, CC0 1.0)

Community ecology is a vital discipline, and general frustration with the lack of a concrete definition doesn’t change that. It is a discipline that is best poised to study the effects of global phenomena like urbanisation, climate change and eutrophication on ecosystems. More and more we’re finding out that as species disappear, what really matters is the interactions that are lost in an ecosystem. Take the Australian bushfires. Plant life will rebound in many areas, but the interactions lost thanks to the local extinction of animal species may mean that the ecosystems won’t ever return to their previous state. Community ecologists should be at the forefront of looking at the effects of events like this.

Which means that challenges like the ones listed above need to be tackled immediately, and with great vigour. I realise that it could lead to more confusion than cohesion, but hey, if you’ve got a goal, you can’t die like William Stoner.

Sam Perrin is a freshwater ecologist currently completing his PhD at the Norwegian University of Science and Technology who has had way too much coffee today to make up for a lack of sleep. You can read more about his research and the rest of the Ecology for the Masses writers here, see more of his work at Ecology for the Masses here, or follow him on Twitter here.

Listed below are some interesting papers which attempt to tackle the issues listed above, as well as our breakdowns of them. I’d also recommend checking out Adam’s interview with Shannon McCauley on the rise of community ecology.

For a look at drawing a link between species associations and interactions – Estimating interaction credit for trophic rewilding in tropical forests by Marjakangas et al., 2018 – Breakdown

For a look at how scale interprets our understanding of community drivers – Invasion of freshwater ecosystems is promoted by network connectivity to hotspots of human activity by Chapman et al., 2019 – Breakdown

For a look at increasing the quality and use of citizen science data – Occupancy models for citizen-science data by Altwegg & Nichols, 2018 – Breakdown

For an explanation of why defining a community is so important in teasing apart interactions – Contrasting consequences of climate change for migratory geese: Predation, density dependence and carryover effects offset benefits of high-arctic warming by Layton-Matthews et al., 2019 – Breakdown