The Revolutionary Headache of Ancient DNA

Ancient DNA can teach us a great deal about prehistoric life. So why is it so troublesome? (Image Credit: Flying Puffin, CC BY-SA 2.0)

When we’ve talked about type specimens on Ecology for the Masses, we‘ve spent a lot of time emphasising how important it is to preserve them. Bottom line is, if they get destroyed, there are a lot of really important biological questions that become very difficult to answer.

Thankfully, landmark leaps in technology have made it  possible to extract DNA from those specimens and store them in a public repository (e.g. the NCBI nucleotide database). So then even if a specimen is lost, the DNA would still be there and could be compared to that of other specimens to figure out if it’s the same species. Sounds like a clever and straightforward thing to do, but as always, it’s more complicated in reality.

To get a DNA sample, you need to destroy a piece of the specimen. That’s often not such a big deal if the specimen is big (for anything bigger than a mouse, it’s not a problem), but for example for tiny flies*, you might need to use the whole specimen to get enough material for DNA extraction. You really don’t want to do that with type specimens. And even if there is enough material for you to remove a chunk without damaging the physical make-up, many of the types are quite old. Over time, DNA decays, making it harder to get enough good quality DNA. Even in a living cell, DNA gets constantly damaged. Usually a cell is capable of repairing it (if it fails, you might get cancer). But as soon as an organism dies, the repair system in the cells stops working also.

The most obvious damage is the fragmentation of the DNA. DNA is organised in chromosomes, which are enormous strings of DNA (chromosome one in humans is almost 250 million base pairs long). But in older specimens, the DNA can become highly fragmented often to the point where no complete strand is longer than 300 base pairs, sometimes even shorter. Because of this fragmentation, it is especially hard to use ancient DNA (aDNA) for barcoding. Barcode regions, which are the regions of a DNA strand used to identify a specimen, are often much longer than the average fragment size in aDNA (e.g. COI is around 650 base pairs long). It makes it hard to create a species ID. There are workarounds, such as splitting the barcode into several smaller regions and then sticking them together after sequencing. But it takes a lot more time and money  and it doesn’t always work.

Another problem with aDNA is the chemical modification, which often occurs at the end of DNA fragments. Normally, bases are protected because of the double-helix structure of the DNA. But when it gets fragmented, you often have single strands just hanging around, which are much more exposed to modifications. The most common one is the so-called C to T transition. You might remember from high school biology that the two base pairs of DNA are C & G and A & T. When C to T transitions occur, it makes it harder to figure out the original sequence, as you’re not completely sure if the T you see is a real mutation or just aDNA damage. But because this only occurs at the end of fragments, you can bioinformatically account for it and then you might be able to identify real mutations.

DNA that is fragmented and has modified bases (aDNA damage) is called ancient DNA. “Ancient” because it was first observed in tens of thousands year-old Neanderthal DNA. Yet the name is a bit misleading – herbarium specimens which are only a few decades old qualify as ancient. How much damage you see does not only depends on the age of the specimens but also on the conditions in which the sample was preserved and stored.  Generally, cold and dry is better for preservation than warm and wet, and stable conditions are better than fluctuations in temperature. 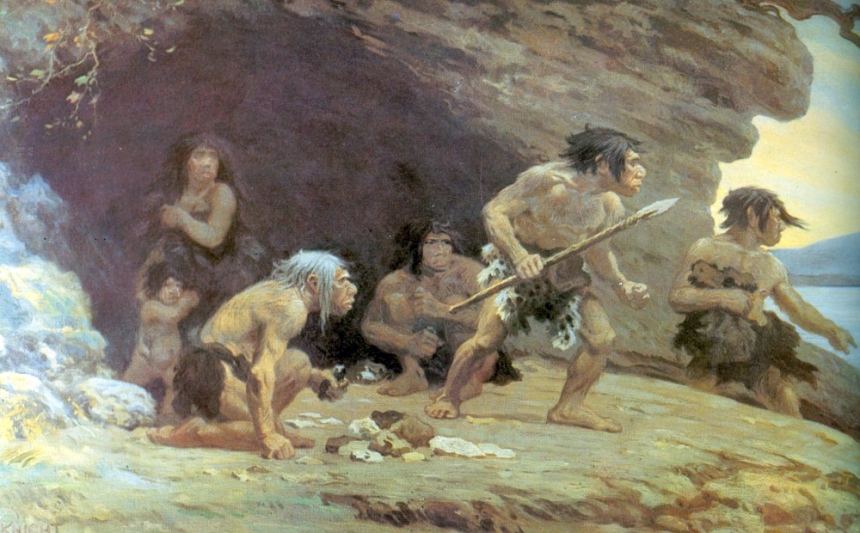 Ancient DNA was first identified in samples from Neanderthals, however the name can be a bit of a misnomer (Image Credit: Charles R. Knight, CC0 1.0)

Obviously there are lots of problems with aDNA, so is it worth all the trouble?  Of course it is! We’ve already managed to get the whole genome of several extinct animals (Neanderthals, Dodo and Mammoths just to name a few), so we can see how they are related to extant species. We were actually able to see that most modern humans have small pieces of Neanderthal DNA in them, a direct evidence of hybridisation between Homo sapiens and our Neanderthal cousins. There is also a lot of aDNA data on modern humans, especially from Europe, which has given us a lot of data on population upheavals and turnover. As some of the populations were (almost) completely replaced, it would have been impossible to figure this out with modern samples alone. We can also look at the species composition in sediment cores to see how entire communities have changed over time. Changes in species after the last Ice Age are of special interest today, as it might help us to predict what will happen in Arctic regions as a result of climate change.

We’ll have more on the uses of aDNA very soon. What can it tell us about our history? Can we identify the makeup of ancient ecosystems? And how far are we from Jurassic Park? In the meantime, stay safe and indoors.

Vanessia Bieker is a PhD candidate at the Norwegian University of Science and Technology. She studies Ambrosia artemisiifolia, an annual weed that is native to North America and became invasive upon introduction to Europe. She uses historic herbarium samples and modern samples from the native as well as the invasive range to study changes over time. Check out her previous articles at her Ecology for the Masses profile.

*And if you don’t think tiny flies are important, I know a woman who will fight you.