Can Humans and Wild Ungulates Live Together in a European Landscape?

The challenges and opportunities of coexisting with wild ungulates in the human-dominated landscapes of Europe’s Anthropocene (2020) Linnell, Cretois et al., Biological Conservation, https://doi.org/10.1016/j.biocon.2020.108500

The “land sparing vs land sharing” debate is not new to wildlife conservation and is more relevant now than ever. Land sparing entails creating areas distinctly for wildlife, commonly referred to as Protected Areas. The science of spared landscape is well developed and its principles were fundamental to early conservation biology. On the other hand, the confinement of wildlife into human-free area is possible on a very limited in a highly anthropogenic landscape like Europe. Hence, the coexistence movement, which requires both wildlife and humans to share their landscape, leading to a wide range of interactions between the too. This is especially true when it comes to charismatic large mammals including large carnivores and ungulates, whose range has large overlaps with ours.

We wanted to summarise the knowledge on wild ungulate distributions and examine wild ungulate-human interactions. Ungulates are quite varied in Europe, and this study included species such as the wild boar, European bison, moose and roe deer.

We also wanted to give an idea of the extent of human-ungulate interactions. For this we used hunting data and car collision reports, and got in touch with a lot of local experts who had access to national data.

Did You Know: Hunting Large Ungulates

The rewilding of predators like wolves into parts of Europe where their populations have dwindled is often suggested as a control for ungulate population. And whilst it may seem like a nicer alternative than the hunting industry, it comes fraught with problems of its own. For starters, hunters in many parts of Europe are generally given a quota, which helps regulate ungulate populations to a greater degree than the unreliable fluctuations often produced by predator-prey cycles. Wolves also pose a threat to humans, with hunting dogs at risk of wolf attacks. To read more about the reintroduction of wolves in a European context, check out this interview with Fredrik Widemo, formerly of the Swedish Hunting Assocation.

We found that 90% of Europe hosts at least one species of large ungulate and 1% hosts as many as five species (check out the figure below)! Moreover, most of their distribution is located outside protected areas. This means there is an enormous interface between human and ungulates, which should give an idea of the varied locations that could be facing challenges (but also plenty of positive opportunities). 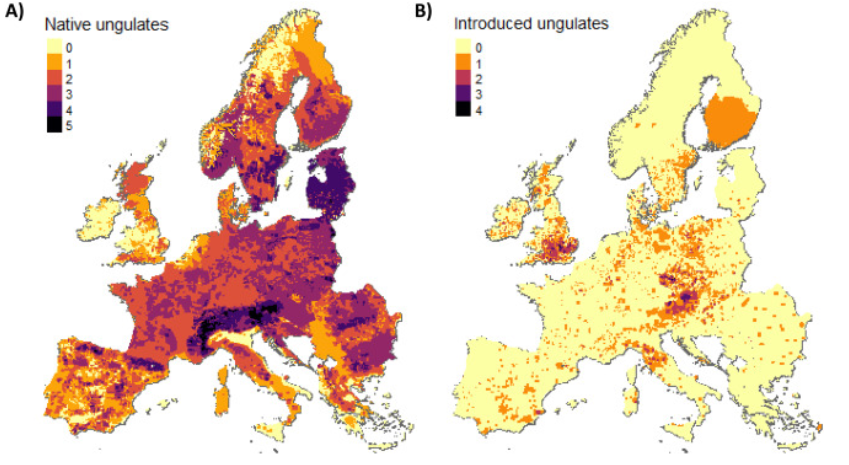 Maps A and B show the number of native and introduced ungulates respectively each 10×10 km grid cell host. Maps taken from the paper (Image Credit: Linnell et al., 2020)

Leisure such as hunting and wildlife watching are an obvious way of seeing the opportunity sharing the landscape provide. In fact, hunting is a very popular activity in Europe and more than 7 million ungulates are harvested each year, yielding food and economic benefit to local communities.

Of course, as in any relationship there is drawbacks. Wild ungulate presence can result in car accidents and we estimate that each year more than 500,000 people are injured or even get killed. Agriculture is also heavily affected and ungulate browsing can be very expensive (Poland reported losses of 13 million euros for a single year).

The data used to summarize mammals’ distribution vary in their quality and time-span. In some countries mammals’ distribution are not updated regularly and we had to use data from the beginning of the 21st century. Nevertheless, given their abilities to cope with humans it is most likely that the range of the studied mammals’ is larger than the one on the map, making our conclusions even more relevant!

Problems require solutions and we provide some principles to work towards a successful coexistence. First, although relatively new paradigms (like widespread sport hunting) challenge the traditional ways of managing wildlife, there is still a need for active management for controlling ungulate numbers in areas where humans and ungulates come across each other on a regular basis. We argue that more transparent and robust science is needed to understand wild ungulates needs and behaviors. These knowledges would set the basis for building successful coexistence strategies. Finally, because of their very large distribution, countries need to collaborate with each other to manage populations of wild ungulates.

Their ongoing presence shows that wild ungulate have are capable of adapting to human presence, the question is whether are not we are ready to accept that we need to share the landscape with them.

The paper is entirely open access so feel free so check it out if you want to know more!

Benjamin Cretois is a PhD Candidate at the Norwegian university of Science and Technology, who works on improving co-existence between humans and large mammals. Follow Benjamin on Twitter @Benjamin_M_CR.