The Healthy Male Wins the Mate

The natural world changes constantly: temperatures fluctuate, predators and parasites enter into the ecosystem, and the landscape itself could change (looking at you, Yellowstone). These changes mean that organisms are under a constant pressure to adapt to local conditions. Due to this pressure, one of the biggest questions for conservation biology is if species are able to adapt fast enough to keep up with environmental changes. Sexual selection is thought to promote rapid adaptation to such environmental changes, but most of the evidence comes from laboratory studies.

Our study looked at adaptation to one of nature’s ubiquitous pressures: parasitism. We were interested in the strength of selection by parasites and if there was subsequent adaptation by the host in a wild population.

We used a long-term monitored population to quantify how parasites affected mating success and female fecundity in a damselfly. This involved using data from 15 years of mating and parasitism data for the common bluetail damselfly (Ischnura elegans). Doing this allowed us to relate mating success to parasite load (e.g. if you’re a damselfly that tends to have more parasites, does that affect how often you mate?)

Then, we conducted competition experiments in which we paired females with either a single male (parasitized or non-parasitized) or two males (one with parasites, one without). This allowed us to identify if sexual selection was driven mainly by females choosing males or by the males competing for females.

Did You Know: Male vs. Female Fitness

Males and females from species that reproduce sexually both increases their fitness by passing their genes on to the next generation, but they do it in different ways. Females increases fitness by laying more eggs/having more offspring. Any egg that a female lays is hers, so they all increases her fitness.

Being parasitized reduced mating success of both sexes, but it had a stronger effect on males (being parasitized was more detrimental to mating for males than females). Interestingly, there was not an effect of parasites on fecundity. 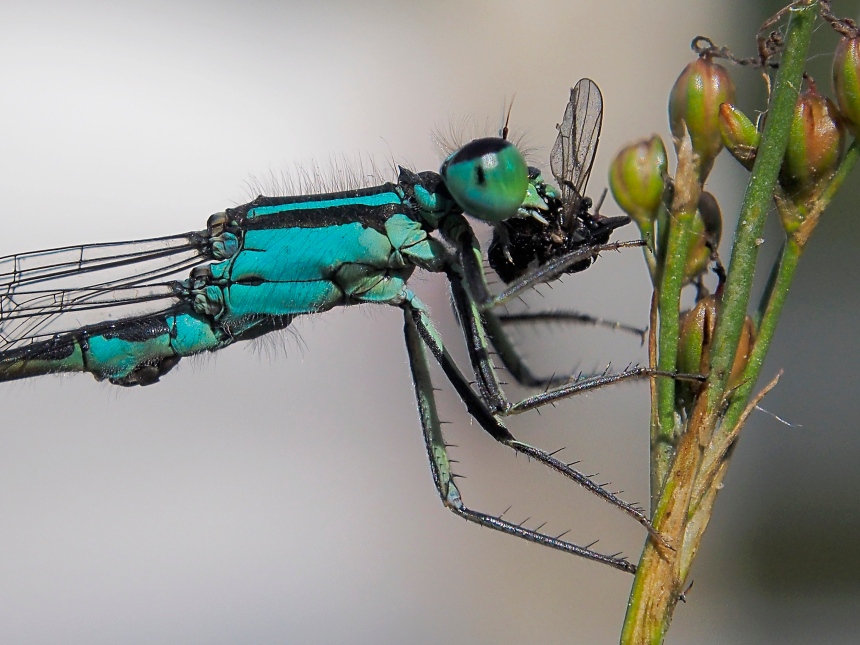 Life’s hard for a female bluetail damselfly, especially when they have males like this one constantly harassing them with mating attempts (Image Credit: Joy-of-Nature, CC BY-SA 4.0)

The experimental design did not allow us to completely tease apart the influences of competition between males and female choosiness. Therefore, although the main mechanism is male competition, it was impossible to measure the relative importance of each of these behaviors individually.

This study is a great (if I say so myself) example of local adaptation, measuring the strength of selection in males and females in two fitness components. We were able to identify the mechanism behind such selection, in addition to being able to track the change in the effect of parasites through time. Awesome!

Miguel Gomez-Llano is a community ecologist at the University of Arkansas who loves climbing but hates biking up hills. You can read more about Miguel and his research here, and follow him on Twitter @mgomezllano.